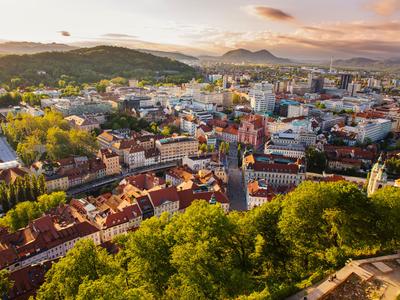 Do I need to take a coronavirus (Covid-19) test before flying to Slovenia?

What documents do I need to fly to Slovenia?

What other coronavirus (Covid-19) restrictions are there in Slovenia?

Can I fly to Slovenia? Are there any travel restrictions when entering Slovenia?

Most visitors from South Africa need to provide a negative COVID-19 test result and/or quarantine to enter Slovenia. Travelers who are not EU/Schengen nationals or traveling within the Schengen zone may only enter the country for an "essential" reason.
For travelers who may enter the country, Slovenia continues to make adjustments to its lists.
Read more about travel restrictions for Slovenia

Can I fly to Slovenia without having to quarantine on arrival?

Visitors from South Africa are not required to quarantine after entering Slovenia.

How long is the flight to Slovenia?

An average direct flight from South Africa to Slovenia takes 16h 15m, covering a distance of 8164 km. The most popular route is Johannesburg - Ljubljana with an average flight time of 16h 15m.

What is the cheapest flight to Slovenia?

What is the most popular destination in Slovenia?

Based on KAYAK flight searches, the most popular destination is Ljubljana (100% of total searches to Slovenia).

Cons: "I was traveling with my 5 and 10 year old kids. Lufthansa got us three seats in three different locations. When I asked to help us get seats together flight attendants told us that I should ask passengers if they could switch seats. Apparently Lufthansa staff doesn’t ask passengers to do it."

Pros: "The crew was very nice and attentive, I really like the food on Lufthansa"
Cons: "The movie selection was limited and dated"

Pros: "Great food. Plenty of restrooms"
Cons: "Late arrival. Had to run to catch the next flight"

Pros: "I had a good seat with a large leg room area. The flight was really comfortable slept like a baby! The staff are really nice."
Cons: "Food was pretty terrible, however we got offered drinks more than once which was good. A better entertainment system or provide free WiFi"

Pros: "The seat is not comfortable. although the plane was an A380, but the configuration is not as comfortable ASIANA."
Cons: "The boarding process is so poorly organized : very very long lines, just a couple of gates for security. The worst I have ever seen is at the Frankfurt airport. It is so bad that I swear I would never fly Lufthansa again. Talking about German efficiency ... nil ."

Pros: "The process went just as it should. Everything was on time, orderly, pleasant and successful. I was able to get to my transfer on time, feeling good and ready for the next leg of the journey."

Pros: "The crew were very considerate. Also they have the best baby beds we have seen so far"
Cons: "The entertainment system was glitchy."

Pros: "Lounge was very clean"
Cons: "In a 10 hours flight Frankfurt to Atlanta only one main meal. Service was rushed job. My seat wasn’t working and Tv remote didn’t work."

Pros: "This space intentionally left blank"
Cons: "For starters, they sat my 12 year old daughter 6 rows away and both of us in center seats so no one would switch with us. Mid flight, my daughter asked to switch with me since the guy next to her kept asking personal questions and was making her uncomfortable. Second, the in flight entertainment did not work. Third, I had pre-ordered a diabetic meal, they “think they may have given it to someone else.” Fourth, one hour delay making for a tight connection. And finally... they lost my suitcase. Should arrive in a few days."

Pros: "Crew was excellent."
Cons: "Lots of entertainment options but most were pretty dated and stale"

Cons: "I propose to keep on board the plane some bright and interesting toys for calming the children who, for almost the entire 10-hour flight, cry and do not give rest to all the passengers. I understand that parents should have worried about this. But if the parents can not do anything with their child, the new toys could help calm the child, and not turn a long flight into torture for other passengers and crew."

Cons: "I requested special meal on line at Lufthansa site. They do not have my name on their list. Basically I do not have any food for eight hours"

Cons: "We were about 20-30 minutes late taking off, then we sat on the runway for about 20 minutes. This made it physically impossible to clear customs and go through security requirements at point of entry US in order to make connecting flight."

Pros: "Friendly crew"
Cons: "when seats recline in economy you can barely get in and out of a seat"

Pros: "The whole flight crew was so polite."

Pros: "The boarding process is very efficient."
Cons: "Lufthansa’s people are mostly good. But there are some obvious opportunities for people to be more friendly. Also, LH like many others continues to serve cold rolls and cold butter on international flights. KLM warms the rolls! It’s the one small touch that would make Lufthansa’s meal service so much nicer."

Pros: "The service and food was excellent"
Cons: "The seats are too close together like most airlines but for a long flight this is very uncomfortable"

Cons: "I had to endure 10 hours sitting next to an obese passenger, who was to big to fit into his seat and had to rest his shoulder and elbow over my seat. The crew couldn't do much and so I had to shift myself sideways for the entire journey in order to make space for this obese passenger to rest his arm into and over my seat."

Cons: "They had overbooked the flight and asked to reroute me. I asked if I would still be able to get to my destination at the same time and to make sure I would have a window seat. Everything from the moment I said yes was a terrible. They rebooked me twice on two different routes when I was in the air. Said a steward would meet me (never happened) instead I was running to catch flights on different airlines in two different airports. The entire situation was disgusting. The running was with all of my luggage. Because of the rebooking I was in the last row of 75 rows on a plane with an additional connection. Every flight had delays creating more chaos for the next flight. The only helpful airline in the bunch was Delta."

Pros: "Flight was good overall."
Cons: "Because of a mess-up on United's part, Lufthansa did not have my spl meal."

Cons: "Systems were down. And it was chaos getting the boarding passes. Nothing was communicated to us until over an hour waiting in line. My daughter was miserable waiting as everyone passed by us, bumping into her and not apologizing."

Pros: "Boarding and crew were great."
Cons: "That "seats" did not have USB connection (for phone charging)."

Pros: "Food/drink choices and portions were very generous on our long haul flight over the Atlantic into central Europe from the west coast of the the US. Efficient boarding. Lots of entertainment options as well."

Pros: "Nothing."
Cons: "The seats are horrendous. I paid for extra room but the armrests don't move. Other airlines have armrest that move in economy seats. No opportunity to rebook online or at the airport. I flew in this route a month before, and since then I've been trying to change the seats. Lufthansa customer service never called me back. When I tried to call, I was put on hold for more than an hour every time. Never flying Lufthansa again."

Pros: "SAS and BA can do better"

Pros: "It was definitely on time, service is good and it was a very nice flight."

Pros: "Crew was fine. Food was ok."
Cons: "Delay, twice - before we boarded and then again after we taxied."

Pros: "Still loads of leg room in economy which is great for a tall person like myself."
Cons: "The food, dinner and breakfast from Johannesburg to Frankfurt was not very nice and not the usual good standard."

Cons: "The seat in front of mine was reclined in the already cramped space provided, twice as far back as any other seat I could see. Please look into the recline on that seat for future passengers. The crew hit my seat, repeatedly with their carts and did not remember to offer drinks to us as they pushed it by. The airlines should consider removing that seat as an option to passengers if there is not ample room for the flight crew to maneuver around it. It made for an unpleasant experience overall."

Cons: "On our return flight from Munich to IAD the airline apparently switched the plane hours before departure. We did not receive notice of this and when we went to board we received new boarding passes. I was traveling with someone and so this reassignment meant not only that we were separated by that we were moved from an Aisle and a window seat together to both of us in middle seats. I understand that this change was out of ground crew control and so we waited to speak with agents about seeing if we could be seated together. While we waited patiently and were told that the only two seats together were both middle seats, the women who were waiting behind us and who were in the same situation as us (but much nor agitated and loud about the complaint) received upgrades to economy plus and were placed in an aisle seat. We were very disappointed with how this was handled and both of us being tall were very uncomfortable on the long flight."

Pros: "Entertainment."
Cons: "Staff was extremely sassy and unhelpful when I had been traveling for 40 hours."

Pros: "The flight attendants were some of the best that I have ever had. Very friendly."
Cons: "The lunch/dinner that we received right before landing in Charlotte. Too much dough and spices. Less bread would be tastier."

Cons: "delayed by 1 hr, and we were not told the reason."

Pros: "On time"
Cons: "Limited space, other companies offer much better comfort for the same price"

Pros: "The staff we're grate really helpful and friendly"
Cons: "The entertainment was not working so this made the flight long and boring."

Pros: "The entertainment system is fantastic, much like Singapore Airlines'. Lots of leg room."
Cons: "There was a mix-up of seats in the back of the plane. I didn't mind being asked to switch seats, but it took them a while to sort out the mess. So uncharacteristic of Lufthansa."

Masks required on board, masks provided on flights to Slovenia

Middle seats unavailable to book on flights to Slovenia

Testing for antibodies, testing for symptoms for flights to Slovenia