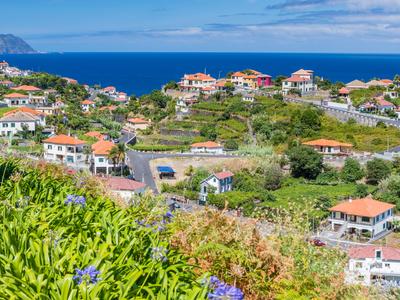 How long is the flight to Azores?

An average direct flight from South Africa to Azores takes 23h 15m, covering a distance of 9059 km. The most popular route is Johannesburg - Ponta Delgada with an average flight time of 23h 15m.

What is the cheapest flight to Azores?

What is the most popular destination in Azores?

Based on KAYAK flight searches, the most popular destination is Ponta Delgada (100% of total searches to Azores).

Pros: "Yeah Everything well organized"
Cons: "I believe so"

Cons: "I was catching a flight in Paris to Aberdeen after arriving from Malaga. The time between flights was not enough 55 mins as the gate closed 20 mins before departure and it takes at least 15 minutes from arrival to taxi to the terminal and then get off the plane. I had to change from terminal F to E which was well sign posted but I only made it with 4 minutes to spare"

Cons: "I was almost forced to stow my luggage in the hold despite me telling the check-in people tjat I had my meds and cpap in the carryon. I spoke to multiple people. Not sensitive."

Pros: "Amazing crew and on time flight"
Cons: "None"

Cons: "Tell me i would misst the next flight and that my beg will not go to the final airport."

Pros: "Crew was ok and servicial"
Cons: "Food and reception at door of boarding"

Pros: "Crew was nice."
Cons: "Food could be better, or at least be provided an option to purchase an upgraded meal. Also, insufficient amount of drinking water provided to passengers."

Pros: "The crew was friendly!"
Cons: "Once again no vegetarian options."

Cons: "Air conditioning too cold. Wasn't offered an evening meal. My luggage went missing and I'm still waiting for it to be delivered."

Pros: "I did like Flying with Delta and Air France but not with Ukrainian airlines (when booking , it should tell you what airlines will be used , to make a better selection )"
Cons: "When I purchased my flight ticket , I purchased with a checked bag (23 kg /50 #) how ever ( who will fly to Ukraine with a 10kg suitcase) I booked for a KLM flight , they used (partener airlines ) when I arrived to LA I flew with Delta , they checked my Suitcase at no cost all the way to my final destinations , that was expected ! When I was going to return , they made me payed 120 dollars ( in Kiev , Ukraine (UIA) , I was very disappointed and I really will love an explanation about all this !"

Pros: "Flight was on time."
Cons: "Food could have been much better in comparison with other airlines."

Pros: "1. The flight attendant staff was very polite and cheerful. 2. The plane was clean and comfortable."
Cons: "1.The entertainment monitor did not function well enough to be able to watch. 2.The headset only function on one ear. 3. You could not hear announcements over the PA system"

Pros: "The plain was ok, the crew really nice and attentive. The only “problem” would be the food, mostly for the breakfast that was awful."

Pros: "The Air France service was ok. Got me to my destination on time and alive."
Cons: "I flew out on KLM on what felt like a new plane. Amazing service, seat, temperature, entertainment and food. In stark comparison Air France’s plane was old, too hot, poor entertainment choices and system and average food which for the French was surprising!"

Pros: "Not much expected as it was a budget trip."
Cons: "Poor timing in between connections, barely made in time to my first connection being the last person to board"

Pros: "The only thing that I like about the flight was that it was easy to boarding"
Cons: "The food was not heat correctly it was cold and I felt that the crew rush to give out the food. The seats are terrible, if the person in front of you reclines you won’t be able to see the screen if your watching a movie and you will see the top of the persons head."

Pros: "Flight attendants were very nice"
Cons: "Didn’t have the meal I ordered Got in 30 min early but no gate for us. We waited over 80min on tarmac to deplane I paid extra for an exit seat but there was no indication when I did that there would be walls for armrests and that made it very uncomfortable for me"

Pros: "Great service, decent food"
Cons: "There was no WiFi on the plane"

Pros: "Boarding was on time"
Cons: "flight was delayed by 20 minutes Boarding got me through Sky priority quickly. Had to then wait in the boarding tunnel as the cabin was not ready. large queue Seats were exactly the same as economy so offered no added benefits apart from the meal on board parked in a distant area of the terminal and had to shuttle bus to 2E which meant a very tight transfer"

Cons: "I don’t know why they keep making boarding with stairs and bus."

Cons: "Flight was delayed 3 times and when I was finally put on a flight that was leaving, they failed to check the connection in Paris (Left me 10 minutes to get from the aircraft to the other plane!) I was moved to SAA in the end after a truly traumatic time in Johannesburg. This is not the first time I have suffered at the hands of Air France sadly. Needless to say, I wont be booking with Air France again."

Pros: "The quality of service from the staff and their courtesy. A great asset of the airline."
Cons: "My luggage was left behind - this despite my being lifetme platinum."

Pros: "Flight attendant was very nice."
Cons: "We got socked with 40 Euro fees for our carry on plus personal item being 2 lbs over. The biggest problem is they were picking and choosing which bags they weighed. 10 people behind us and before us got in without incident. Plane wasn’t even half full so they were deliberately trying to make more $."

Cons: "Booked assistance and got dumped at the gate 3hrs before departure, no English spoken and didn't even ask if my mum needed the bathroom or if we wanted to do some shopping. Just in a rush to get rid of us. Flying only KLM from now."

Cons: "The company simply lets passengers board a fulled booked flight with far too much luggage. Result, take off 20 minutes late because there was not enough room for luggage in the overhead compartments. I was flying with just a small backpack that went under the seat"

Cons: "Its been a week. My trip has ended. I still do not have my bags. Terrible customer service."

Pros: "The fresh bread and cheese."
Cons: "The staff is very unprofessional in receiving the passengers and serving the drinks mainly. The luggage wasn’t received and after 24 hrs no news about it! It’s a shame"

Pros: "It was on time"
Cons: "Food was AWFUL! Better to serve nothing"

Pros: "The time of the flight was great as well as the arrival time and subsequent connections to Paris. Enjoyed the rather full line of in flight beverages!"
Cons: "Leaving late seemingly without reason from Paris - chaotic boarding line in Paris with difficult to hear PA. Seats were ok'ish but than again, it's a 45 minute flight. The sandwich was gross and I'm somewhat known as a person who eats everything!"

Pros: "The crew was very nice and helpful."
Cons: "The food was really poor. The chicken was as dry as it can be. The food taste was poor. I flow 3 weeks ago with KLM and the food was pretty good for flight food. Plus I didn't get my baggage at the end."

Pros: "It was a short flight."
Cons: "Seat to seat space OK for anyone under 4 ft tall. Pressed intoth seat framein front, I couldn't even turn or get my feet under the seat to extend."

Pros: "The service provided by Jet and Air France was excellent. The wheelchair service did help very much"

Pros: "Movie selection was awesome! Food was good too."
Cons: "Too many interruptions. Every time there's an announcement, it interrupts the movies and some of the announcements were completely unnecessary and there were so many of them, it was like constant interruptions, really annoying."

Pros: "Same as above, the crew was very friendly and the food was great."
Cons: "Seating was cramped and uncomfortable for a tall person."

Masks required on board, masks provided on flights to Azores

Middle seats unavailable to book on flights to Azores

Testing for antibodies, testing for symptoms for flights to Azores